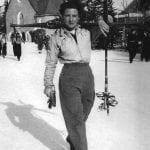 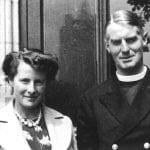 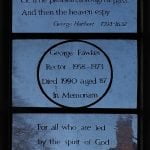 Memorial to George Fawkes in the west window in Compton Church

This tribute was given by her son Nigel at her funeral in All Saints’ Church, Compton on Friday 21 April 2017 before her ashes were laid to rest in the churchyard  with her mother Mamie and her husband George.

I had a good friend who had a mission – She wanted to put the fluffy back into ladies’ lives, and so she started a movement called the ‘Fluffragettes’.

Diana would not have joined the Fluffragettes, because Diana did not do fluffy.

Principled, practical, logical, determined,   – these are more appropriate epithets, as anyone who played her at Scrabble can testify.

Diana and George came to Compton in 1958, on his retirement as a Royal Navy chaplain.

They loved Compton after the constant moving of their Naval life.  Diana was a skilful and knowledgeable gardener and grew all our own vegetables.  To have to buy a vegetable was a mark of failure as I remember.

Her parents, Graham and Mamie met as undergraduates at Oxford where they both read modern languages.  The choice of a career seems to have been just as difficult then as now, for – not yet married – they embarked for Buenos Aires in 1906 where they got married in the Cathedral, and he had a job building the first Argentine railway network, and she became a crack pistol shot for self defence in that frontier land.

They returned to England and Diana was born in London on 27th January 1914.

Her father, Graham was already a pilot – being one of the very first to join the Royal Flying Corps.  (I hope you will get a chance to look at the album of her early life afterwards, as it contains some wonderful pictures of those early flying machines).

He went off to war, and a few months later in 1915 was shot down and captured. Diana was only 18 months old and did not see her father again until she was five.

After his return from POW camp in 1919 Graham stayed on in the RAF, and her two brothers and her sister Anna were born over the following three years.  Service life meant frequent moves, and Diana always regretted that she had been sent to six different schools by the age of 13.

A highlight was their posting to Egypt when she was 7, and her mother Mamie, a keen Egyptologist never forgave Howard Carter for first bringing the treasures of Tutankamun out of the tomb the very day after their fortnight’s holiday there had ended.

A gifted athlete, Diana acquired the family nickname of Possum – as she liked to hang upside down in trees.

At 13 she went to Down House near Newbury – a settled school at last, and one where she revered the head mistress, the renowned Miss Willis, and in due course became captain of gymnastics, fencing, vice captain of cricket, and with a good ear for languages, toured a Molière play in France.  (She used to wonder what the French audiences had made of it – but the girls found it all jolly good fun).

Her parents were now happily back in Oxford, where the RAF had tasked Graham with setting up the University Air Squadron.  Among his student pilots was one George Fawkes, a student at Keeble College reading Medieval English under professors such as JRR Tolkein.  Intriguingly, he was the pilot tasked to give the Boss’s daughter her very first flight aged 12!

After school, she took what came later to be called a ‘gap-year’.   She embarked for South Africa where a family friend was vice chancellor of the Witwatersrand University in Johannesburg.  There she was trained in high board diving by the coach to the South African Olympics diving team, and she also travelled widely in the Zulu hinterland taking many fine photos with her complicated Rolleiflex camera. (which we still have to this day!)

On her return she considered architecture, but trained as an haute couture dressmaker in London under a savage émigré Russian aristocrat.  We still have a little box of her business cards which I note say: ‘Terms: Strictly Cash”.

The family were all early skiing enthusiasts.  Diana started when she was 12 in 1926 and with her love of speed became so good that she was selected to train for the British Women’s Olympic team for the planned 1940 Winter Olympics.  Her great regret was that Hitler scotched that plan.

Diana had good French from school and wanted to also learn German.  So, undaunted, she bought an old model Y Ford and set off in 1936 to stay with a family in Munich. Hitler’s ‘Brownshirts’ were strutting the streets, and she said she took particular pleasure in avoiding giving any ‘Heil Hitlers’ or Nazi salutes!

Back in London she took her bi-lingual secretarial exams and was promptly head hunted by the secret service to work for Dilly Knox, the famous chief cryptologist who was desperately working to crack the Enigma code.  And this is why she was among the very first to move to Bletchley Park with him in the summer of 1938.

She continued in the secret service until 1941 when – after her brother Nigel had been killed in the Battle of Britain, and her father drowned six months later when his ship was torpedoed – she was given compassionate leave and went to look after her mother in Shaftesbury.

At this time she got to see much more of George and they married in January 1942, and managed a very brief honeymoon before he set off as Chaplain in the aircraft carrier HMS Illustrious for war in the Far East.

So once again she had to wait out an anxious time.

George’s mother was also killed when the family home in Southampton was bombed by the Luftwaffe. And sadly her younger brother John, aged 23 and by then a veteran of the North African campaign, and a decorated Major in the Scots Guards, was killed at the Anzio landings in Italy.  He was the last of the male line of Weirs, and consequently we have since used Weir as a family name to remember them.

In 1973 George and Diana retired from Compton – and you will see the memorial window to George behind you, which contains one of her favourite passages: George Herbert’s

’ A man that looks on glass,
On it may stay his eye;
Or if he pleaseth, through it pass,
And then the heav’n espy.

They bought Hunters Hill, in Twyford, by rather daringly submitting a sealed bid for ‘£100 more than the next highest bid’.

Diana set about remodelling both the 1930 house and the garden.   Once accomplished she volunteered to join the Winchester Guild of Cathedral Guides and for the next 22 years led regular tours in German.

During this time the Cathedral introduced a 75 year retirement age for guides, but despite many subtle efforts to get her to divulge her age – she never let on, and so continued until she was 94 when failing eyesight finally got her.

She carried on fiercely independent, living with very little help at Hunters Hill until past her 100th birthday, when we finally persuaded her to relax a bit and take a place in Brendon Care’s Old Parsonage in Otterbourne.

There in the ‘Mamie Weir Wing” bequeathed by her mother, she lived out her final couple of years, and even achieved celebrity status by making two TV programmes about her time and experiences at Bletchley Park.

Hers was a generation marked by war, grit and sacrifice to whom we must always be grateful for giving us the chance to lead the peaceful lives we have enjoyed.

Diana – You were an example to us all – may you rest in peace!

This item was published in the May 2017 issue of the Compton and Shawford Parish Magazine by kind permission of Nigel Fawkes.

Her son Nigel recalls in his tribute above how Diana went home to Shaftesbury in 1941 to look after her mother Mamie, whose elder son and husband had recently died in the war.

After Diana moved to Compton in 1958, when her husband George became Rector, they acquired the plot next to the rectory. There they built a bungalow for Mamie which she called “Little Pensbury”, after her home in Shaftesbury. 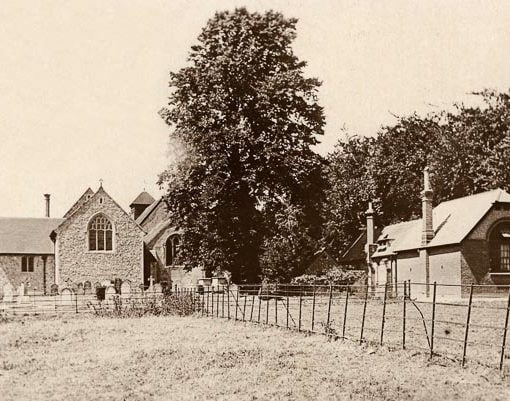 What’s the connection between this postcard, the first World War, a grave in Compton churchyard, and a romance with the master of a 19th century convict ship? Read on… 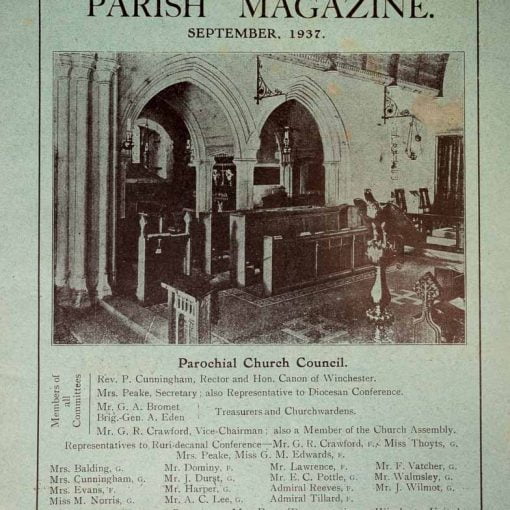 The Ancient Roads of Compton, by J.S.Drew, appeared in five parts in the Compton Parish Magazine from September 1937 to January 1938. 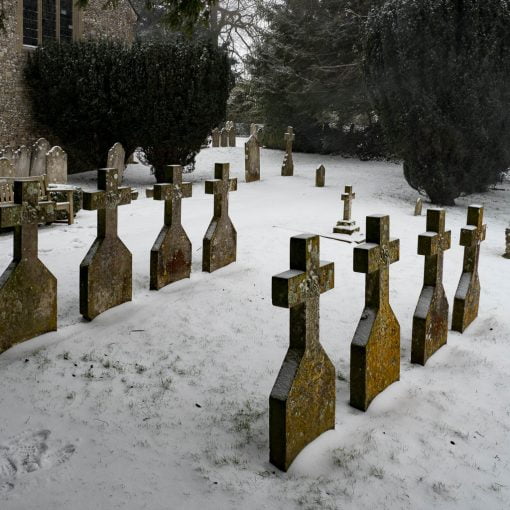 Relph Burn remembers life in the parish and his duties as sexton, verger, bell-ringer and grave-digger, which he took over from his father in 1931. 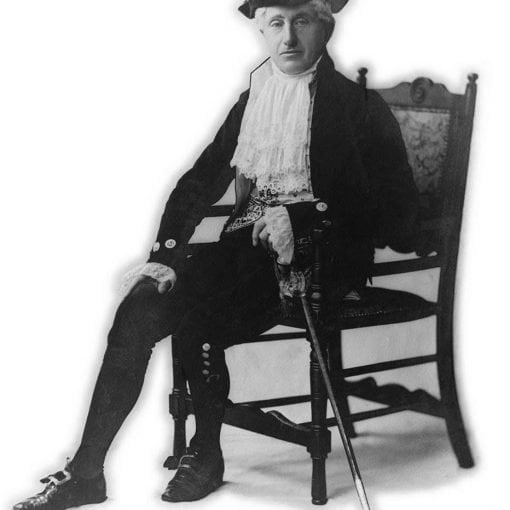 The Actor and the Architect: Arthur Heathcote and Herbert Kitchin – distinguished residents whose contributions greatly enriched the life of the parish.