Skip to content
Home » Golf Courses in Compton and Shawford

Golf Courses in Compton and Shawford

Did you know that in 1900 there were 2 Golf Courses in our Parish? The popularity of golf was increasing with the development of the railway and improved transport. 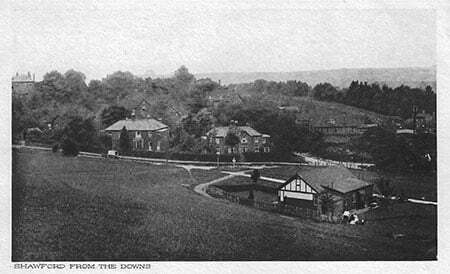 s established in 1890 on Shawford Down as a downland 9 hole course; it closed in 1940. In 1902 there was also a Ladies Section. Holes were played over both the Winchester and Shawford roads to Southampton causing much concern to passing traffic. In 1914 membership was 2 guineas p.a. for men and 1 guinea for ladies, who were not allowed to play on Saturday afternoons.

Rex Roberts, aged 11 when he joined, described members as “elderly, with many retired Admirals and Generals, who talked, argued and drank a lot rather than practising their golf”!

Play could be slow and on one occasion an exasperated American Officer pulled out his revolver and fired over the heads of the 2 elderly men in front! The Club House based at the bottom of the Down, 50yds from the Station, was given planning permission in 1910 and was later moved after WW11 to the Memorial Playing Field on Compton Down as the pavilion where it remained until 2003.

Winchester College GC was established in 1891 for the boys and dons on the land between the Winchester to Southampton Roman road and what is now Badger Farm Road. It was grazed, like many Courses of the time, by sheep to keep the grass short.

On one occasion a passing wayfarer was hit in the chest by a golf ball. To his consternation he was then barracked for being in the way. The police were involved and later the Tee for that hole was moved. The Course closed in 1915 and moved to the then recently established Hockley Golf Course.

the wooden Wayside Cross, near the main road, used to stand further west, when the old road passed below Cliff Way – significantly named – through a narrow cutting, so narrow that golfers would drive across it to and from a green lying near Hurdle Way, until a stray shot hit a double-decker bus and the green was abandoned.

The Old School at Silkstead: J.S.Drew’s account of the Catholic School which operated at Silkstead during the second half of the seventeenth century

Manage Cookie Consent
To provide the best experiences, we use technologies like cookies to store and/or access device information. Consenting to these technologies will allow us to process data such as browsing behaviour or unique IDs on this site. Not consenting or withdrawing consent, may adversely affect certain features and functions.
Manage options Manage services Manage vendors Read more about these purposes
View preferences
{title} {title} {title}