The following text is an extended version of an article in the August 2019 issue of the Compton & Shawford Parish Magazine.

A hundred years ago, in 1919, a 72-year-old widower moved into Compton Close in Cliff Way.

During the fifteen years that he lived here, until his death on 5 August 1934, he made a lasting impression on the parish.

He was Arthur Malcolm Heathcote, whose lifelong love for acting inspired generations of local amateur dramatics. Compton’s Heathcote Players were formed in his memory, and the upstairs room in Shawford Parish Hall where they used to rehearse is called the Heathcote Room.

Hursley residents will know that in 2018 it was 300 years since a wealthy young merchant, William Heathcote, bought the Hursley Estate from the daughters of Richard Cromwell. In 1720 he married Elizabeth, the Earl of Macclesfield’s daughter. He became MP for Buckingham and then Southampton and in 1733 was created a baronet, of Hursley.  His descendants continued to be one of the most influential families in the area for nearly two centuries, and for many years were the largest landowner in Compton.

In 1825, after his uncle Sir Thomas died childless, another William Heathcote became the fifth baronet. Before his first birthday, this Sir William had lost his own father, Rev William Heathcote, who died in a hunting accident in 1802.

Sir William, the fifth baronet, studied at Oriel College, Oxford, and so greatly admired his tutor John Keble that he would later bring him to Hursley as its vicar.

After the death, in 1881, of Sir William Heathcote, the Hursley estate was sold in 1888 to Joseph W. Baxendale, the owner of the Pickfords logistics and removal company.

Arthur was the sixth son of Sir William. Aged 9 he was sent to Twyford School, who had just hired a bright young Oxford don as headmaster. This was George William Kitchin, who would go on to become Dean of Winchester and then Dean of Durham, the first Chancellor of the University of Durham, and the father of Compton architect Herbert Kitchin.

Like his father, Arthur went to Oriel College Oxford, where we know he enjoyed acting because there are some small picture cards of him as a student taking women’s roles (there were no women undergraduates at that time). 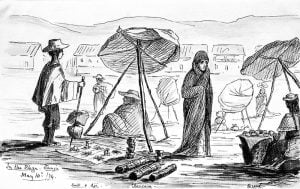 In 1873, Arthur left for a gap year in Peru. His letters home to his family, with details of the 50-day journey on the steamship Chimborazo round Cape Horn, still survive, along with his sketchbooks. His travelling companion was Henry Martin Gibbs, who had been advised that the air of the high Peruvian Altiplano would be good for his health. They rented a house in the village of Matahuasi where, to the surprise of the locals, they put on amateur dramatic performances, complete with painted scenery, theatrical wardrobe and lighting.

H.M. Gibbs’ father William had made a fortune in guano fertiliser. He was a major benefactor of Keble College, Oxford (in memory of John Keble, vicar of Hursley).

H.M.Gibbs’ mother Blanche was a cousin of Charlotte Yonge, who lived at Elderfield in Otterbourne. After the death of her husband in 1875, Blanche Gibbs purchased the patronage of Otterbourne. This provided the funds which enabled Otterbourne to gain its independence from Hursley and become a parish in its own right with its own priest.

Back home after his gap year, in 1879 Arthur Heathcote married Mary Forbes Young, the daughter of the Vicar of Hursley. They moved to London where he continued to put on dramatic performances. He corresponded with social reformer (and co-founder of the National Trust) Octavia Hill about the plays likely to interest the less well-off.

Arthur and Mary had four daughters and then two sons. Mary died in 1903, not long after their eldest daughter, Dorothy, had married Arthur Crawford Lee, son of the Warden of Winchester College, Rev Godfrey Bolles Lee (who had played first-class cricket).

After his wife’s death, Arthur moved away from London to Farringdon, near Alton. From that base, old papers show that he covered a wide area putting on dramatic performances in places such as Basingstoke, Alton, Alresford and Winchester, often assisted by his daughter Dorothy and sometimes by daughter Ruth

Arthur’s two sons were educated at St Paul’s School, where other notable students included the poet Laurence Binyon and Bernard (later to be Field Marshal) Montgomery. Both sons died in the First World War.

Martin’s elder brother, James Shirley Heathcote, had travelled to Canada and was at some stage a lecturer at the University of Saskatchewan. He met local girl Agnes Ethel Hatcher and they were married in Elkhorn, Manitoba in August 1912.

Lieutenant James Shirley Heathcote, 1st Bn. Coldstream Guards, died on 28/08/1917 of wounds received in the Battle of Loos, aged 30. He is buried in Kensal Green (All Souls’) Cemetery, London.

James was survived by his wife and a son, Martin Shirley Heathcote (b 1914).

Arthur’s sons are commemorated on the War Memorial in All Saints Church, Farringdon. There is also a memorial to James Shirley Heathcote in Canada. And there is a plaque in their honour at the back of Hursley Church, adjacent to the memorial to their grandfather, the fifth baronet.

Why did Arthur move to Compton? It was closer to his roots, although Hursley Park had been sold after death of Sir William in 1881. Daughter Dorothy lived at Hatch Thoke, in the Otterbourne Road (next to Compton Lodge).

The Commonwealth War Graves Commission website gives the details of James Shirley’s young widow as A. Ethel Heathcote, of Home Close, Compton. Could Home Close have been an annex to Compton Close? Arthur’s newly-widowed daughter-in-law would have needed somewhere to live.

Old parish magazines report performances by Mr. Arthur Heathcote (and his Company) at WI meetings, Rectory fêtes and many other local events.

After his death 85 years ago, on 5 August 1934, Rector Philip Cunningham wrote in the September 1934 Parish Magazine

With the death of Mr. A. M. Heathcote an outstanding personality has been removed from among us. He came to live in Compton in 1919, and ever since that time he has been making, year after year, great contributions to the life and interest, to the culture and pleasure of this parish.

If dramatic representation has become a sort of speciality of this parish, it is due to the work of Mr. Heathcote and to the patient and persistent teaching which he gave to his “Companies.”

We all owe him a great debt of gratitude, and especially those boys and young men, women and girls whom he taught so successfully to forget themselves and to impersonate the characters of Shakespeare and other dramatists with such laudable success.

The Heathcote Players, founded in his memory in March 1936, were active for most of the rest of the 20th century.

The inscription below the framed photo of Arthur Heathcote reads:

In affectionate and grateful remembrance of one who, by the inspiration of his own acting, & by the unselfish devotion & enthusiasm in training others, will hold an honoured place among the benefactors of the Parish

One of the longest-standing and most popular institutions has been the dramatic club, the Heathcote players, founded in 1936 and named after Mr. Arthur Heathcote, a talented amateur actor who had long encouraged productions in the village. For many years the Shawford Pantomime, written and produced by Mrs. B.M. Clegg, was a well-known and very popular attraction at Christmas time.


Arthur Malcolm Heathcote
To mark the 100th anniversary of Arthur Heathcote’s arrival in Compton, and the 85th anniversary of his death on 7 August 1934, we’ve included an extended article with glimpses into his life and background. Like many others of his generation, his life was tinged with sadness at the loss of his two sons in the First World War. The article is based on a short talk, given at the 2018 Remembrance Day service in Hursley, about local families affected by the Great War. I’m indebted to the Hampshire Records Office for access to back copies of the Hampshire Chronicle, the Parish Magazine, and for its collection of Heathcote family papers indexed by AMH. Arthur Heathcote’s great-great-grandson kindly lent me some notebooks and sketchbooks.

Rev A H W Blake, Rector of Compton 1902-1903, a widely published photographer with an international reputation